Haruko and Kanda realize Medical Mechanica's plan is to cover the Earth in pins, but disagree on their next move. During class, Haruko arrives and starts sensually touching Sasaki while he attempts to announce more bad news about the basketball team. Mr. Sudo adds that the team is struggling so much that Haruko has been hired to help, though it's already clear her mind is elsewhere. Kana brings her friends to the game that day to cheer on Sasaki, but Haruko's behavior distracts both him and Aida, who is jealous and accidentally hits Kana in the head with the ball as a result. Meanwhile, Pets trades an object with Mossan for her hand-made cloth featuring a piece of meat. Haruko fakes an injury to force Sasaki to rub lotion on her inner thigh, much to his embarrassment and Kana's frustration. Maki Kitaki gives a speech about love on television during Kana's work and she becomes so distressed she has to leave early. Maki and Kanda meet at the soba shop in secret after to discuss Medical Mechanica's plans, and she hints at a plan of her own that Kanda is unsettled by. She also mentions a "being called Haru-something" that she tells him to deal with, which brings forth a memory from Kanda's younger days. Haruko had once been in the Bureau's facilities and was taking a bath under his supervision. Like with most men, she toyed with his attraction to her without ever returning the feelings. In the present, Sasaki manages to find Kana after much searching to check on her injury and confirm that Haruko's advances are unwelcome. Pets makes another random object trade with Hijiri during this time. Throughout the conversation, Kana is reading advice cards held up by her friends, but gets a terrible headache at their command to confess her feelings for him. She winds up knocking him out when he gets too close to her as she reacts to the pain, ending any romance for the time being. The next day, the girls are discussing Sasaki and reveal he used to play on the basketball team until a nerve condition progressed to a point that it became impossible. Kana resonates with this, as she used to be sick when she was younger and is suggested via flashback to have spent long periods alone in a hospital. She encounters Haruko, who is looking for Sasaki, and the two have a glaring contest as Kana claims she doesn't know where he is, but finds him immediately after trying unsuccessfully to shoot baskets by himself. They talk and are enjoying themselves until Sasaki's nerve pain flairs up, disrupting the conversation. He admits it happens when he moves too fast or his heart beat increases, his blushing suggesting the latter. Haruko, likely frustrated with her manipulation's slow progress, hits Kana with a basketball before she can continue to progress the romance naturally. She falls onto Sasaki and knocks them both into a laying position, head glowing bright pink as she leans in to kiss him. However, she stops as her N.O. activity suddenly calms down, claiming the "spark" is gone. A robot arrives because of the activity and sucks Sasaki inside itself, merging their consciousness, much to Haruko's pleasure. She came prepared for a battle, suggesting this was her true reason for toying with the two, and defeats the robot by hitting it with a basketball dunk from the three-point line for style. The next morning, Sasaki has recovered and Kana stops him before class starts to talk. She apologizes for her behavior and admits she isn't ready to go that far with him, something Sasaki is able to accept. 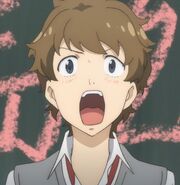 Retrieved from "https://flcl.fandom.com/wiki/Pit-a-Pat?oldid=7984"
Community content is available under CC-BY-SA unless otherwise noted.