This article is a stub. You can help FLCL Wiki by expanding it.

Masurao (マスラオ?, Masurao) is a member of the Bureau of Interstellar Immigration in FLCL Progressive.

Masurao, together with Eye Patch and Tonkichi, works at the Bureau from his house in a collaborative effort to fight Medical Mechanica. He is the son of Commander Amarao and has a daughter, Aiko, whom he keeps his activities secret from by pretending to be a boxer.

He is a fairly business-focused person who rarely expresses extreme emotions. He cares a certain level for the treatment of Canti during the ride to Oozu, if only because his body is already severely damaged and integral to the Bureau having an influence on people with N.O.. He tends to disagree a lot with Eye Patch and finds Tonkichi's undercover persona annoying. His interactions with Aiko at their home were minimal, usually consisting of asking where the most recent object she traded disappeared to. He gets incredibly worried when one of those objects happens to be a potted plant, though it's unclear at the time why. His choice to hide his true reason for having Eye Patch around so often from Aiko is perplexing when she herself is aware of the Bureau and her relation to it. This becomes obvious when Masurao only has to say she is "free" when Mabase is being destroyed for her to understand, and also implies she may have either felt a duty or been forced to stay in some capacity.

Masurao's skin is tan and his jaw is very square. He has red hair, which is mostly covered by a baseball cap that also casts a shadow on his eyes. The cap has a red visor and black crown, with a red logo on a blunt white triangle bordered in red. He has long sideburns, a tuft of hair sticking out between his eyes, and keeps his hair short and messy at the back. He also has thin black stubble lines on his chin and below his sideburns. He is always seen wearing a full blue tracksuit with white lines, unzipped to show a white t-shirt underneath, and blue shoes. His eyebrows are revealed to each be three thin, red, curved lines in Our Running, much like his father. 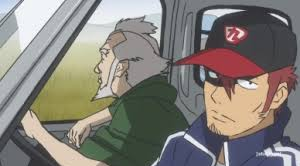 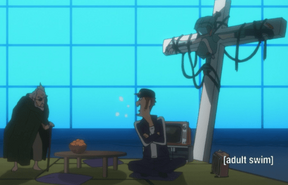 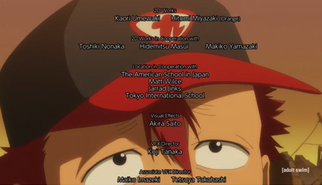 Retrieved from "https://flcl.fandom.com/wiki/Masurao?oldid=8314"
Community content is available under CC-BY-SA unless otherwise noted.