"LooPQR" is the fourth episode of season 2, FLCL Progressive and the tenth overall. It premiered on Adult Swim on the Toonami block on June 23rd at midnight ET.

Marco is the only one that seems to think that happy Hidomi is attractive. While he's aware that Ide is in love with her, he works part time to buy her a charm. Meanwhile, Jinyu and Raharu scheme to go up to the plant in her Bel Aire.

Following her headphones being screwed into her head as part of its security protocol to prevent removal, Hidomi's personality completely flips with her upbeat yet eccentric subconsciousness manifesting, leaving everyone concerned. As Medical Mechanica were the ones who created the headphones, Jinyu formulates a plan to attack the active Medical Mechanica plant to cancel the signal keeping the headphones in security mode. Meanwhile, revealed to possess the remains of an inactive Canti which they have been using to develop N.O.-powered technology, Eye Patch and Masurao attempt to find the missing flowerpot. The latter's daughter gave it to Goro, not knowing it has the ability to reverse N.O. channel polarity. Jinyu, Haruko, and Ide snatch Hidomi off the street in Jinyu's car and carry her to the Medical Mechanica plant, only to reach a dead end when the question of how to enter the plant is brought up. While Haruko and Jinyu argue about their plan of attack, Hidomi begins playing with Aiko's flowerpot and accidentally drops it on Ide's head, reversing his portal's polarity to suck Jinyu and Haruko into the inside of the factory. It is while inside that Jinyu, wanting nothing more than to allow Atomsk to remain free, attempts to reason with Haruko before unintentionally provoking her. The damage they cause to the factory's interior while fighting deactivates the headphones, allowing them to travel through Hidomi's N.O. channel to continue their fight outside. At that time, having manifested a N.O. channel from bumping into Hidomi earlier, Marco is testing a Viking Cruise ship ride, which is actually a N.O. device of some sort, at a nearby theme park. He suddenly gets launched at the MM plant as a giant bamboo shoot sprouts from his head and a small robot puppet climbs up it, the robot getting involved in the fight between Jinyu and Haruko. Ide tries and fails to rescue Hidomi as Jinyu's car begins rolling off the side of the plant. Jinyu saves them at the cost of being fatally wounded by Haruko's attack. Haruko destroys the bamboo shoot and then devours Jinyu, the latter act restoring Haruko to her original pink-haired self. She then requests a headphone-free Hidomi help her absorb Atomsk once more, but having seen Haruko's previous attempt and gleaning her intentions for Atomsk's power, Hidomi refuses while placing the security headphones back on her head. 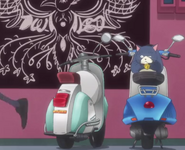 Retrieved from "https://flcl.fandom.com/wiki/LooPQR?oldid=7774"
Community content is available under CC-BY-SA unless otherwise noted.