Ko Ide (井出・コ?, Ide Ko) is a character in FLCL Progressive. He is classmates with Hidomi Hibajiri and appears to possess an N.O. channel as a result of an encounter with Haruko Haruhara. He has a crush on Hidomi and is the deuteragonist of the show. Brought up through a tough and abusive life that he keeps secret, he has the ability to hide how he truly feels deep down with an outwardly positive and excited personality.

Ide debuted in episode 1 of FLCL Progressive in the classroom scene, where he was talking with Goro and Marco about girls and clothing style choices.

Ko Ide, age 14, is the main male protagonist of Progressive who starts off as a stranger to Hidomi. He takes a mild interest in her during school, but would soon be catapulted into her life due to the meddling of Haruko. His new, self-delegated role became protecting Hidomi, fighting alongside her against the likes of Medical Mechanica and Haruko as a result. Together, they are navigating this never-ending chaos while nurturing a budding relationship.

Ide is very tough and a hard worker as a result of his home life. This may or may not contribute to him being the only student in his class to wear a plain Japanese school uniform and sport a buzz-cut. At school, he finds himself trying to woo his teacher with art gallery tickets, and explains the plan to his friends with an air of highbrow suggesting a superior knowledge of women. He is entirely oblivious to the fact that this teacher is actually Haruko using intimacy to activate a N.O. channel in him, however, showing his naivety. His eyes are drawn to Hidomi's butt before he knew her personally, and any suggestive positions or actions causes him to blush intensely. He also moves quickly in his relationships, escaping from the off-screen date with Haruko in just his boxers and literally jumping at the chance to get intimate with Hidomi immediately after seeing their shared interest. On top of this, he becomes incredibly protective of Hidomi, both as a potential boyfriend and a chivalrous third party to Haruko's scheming. he does what he views as best for Hidomi, even if it means having to help Haruko to save her from her headphones. He eventually goes back to seeing Haruko as an enemy and tries to take on Haruko himself despite seeing Jinyu lose. His strength is barely enough to swing Jinyu's guitar, however, prompting Haruko to taunt him with double-entendres, suggesting he is sexually inadequate and needs "practice." Even when straddled by her, Ide remains faithful to Hidomi and they join together to convince Haruko to leave them alone at the end of the series. It is also around this time that Ide, who had been unintentionally ignoring people to be Hidomi's protector, is seen getting along with his friends more.

Ko has a moderately angular face with rounded edges on his chin. These angles compliment his large, square glasses nicely, which are arguably his most notable feature on his rather plain face. His eyes are a pine green and have a dark line on the upper eyelids that suggests noticeable eyelashes. He sports a messy black buzz-cut that matches his messy, bushy black eyebrows. He almost exclusively wears a traditional Japanese school uniform in black with a white undershirt beneath, the only exception being his swim trunks and green hoodie at the beach in Stone Skipping. He somewhat resembles Gaku from season 1.

Ide appears to be a normal student on the surface. He dresses in the school uniform, talks about girls like he's an expert, and finds time to 'date' Haruko, who is disguised as a teacher at the time. He even seems to take a liking to Hidomi despite this relationship. He even protects her from the robot that tries to attack them. However, he often spends his time outside of school working until sundown. He splits this work time between slave-like physical labor at a junkyard where he's whipped by his boss as he (and a few others) drag car-sized objects around in the blazing sun, and selling common things repurposed for hyper-specific uses. The latter gets him mercilessly beaten by some shady men. He does this to make a living for himself, as he lives in the low-income part of Mabase, but he purposely hides this part of his life from everyone except Goro and Marco, who also seem to live in the area.

Despite these tough circumstances, when Hidomi stops by to give him schoolwork he missed and passes out after overflowing, Ide immediately gets over the pain from the beating to carry her back to his home. They share a moment of closeness bordering on intimacy before being interrupted by Haruko, and later Jinyu. This, as well as the previous robot attack, presents to him the position of Hidomi's protector, and he takes on the role with no regard for himself. He also starts to explore the idea of a relationship with her more, but these two things begin to distract him to the point that his friends feel somewhat left behind.

He goes so far as to try to fight Haruko himself after seeing Jinyu get defeated, but even his strength from his work isn't enough for an alien with the fighting experience Haruko has. By the time Hidomi, who had been searching for him, finds the two, Haruko is straddling Ide, who was on the floor and had just finished telling Haruko he doesn't like her anymore in response to her advances. Hidomi misses this context, however, and overflows, accidentally sucking Ide into her N.O. portal. She manages to get him back by the final episode and the two take a unified stand against Haruko. Neither of them want to be a N.O. portal for her schemes.

He possesses the right head for a powerful N.O. channel, but was passed on by Haruko in favor of Hidomi's N.O. channel. His own channel only released two robots, one of which he chose to summon and performed the feat of having complete command over. He is very strong and determined as a result of his home life, but even with Jinyu’s guitar, he was no match for a nonchalant Haruko. He kept getting back up after Haruko knocked him down, suggesting a high durability, though it made no difference once Hidomi arrived.

They gradually formed a close bond and both have a crush on each other. They are close, Ide risked his life to save her without concern for himself. At the finale of Progressive, he and Hidomi are shown holding hands and leaning in to kiss, showing they have become a couple.

Goro is one of Ide's good friends, but he doesn't approve of Goro's 'unisex' fashion. Goro is very jealous of Ide's relationship success with their teacher, though Haruko was actually just using their time together to examine his N.O. capability. Goro also experiences jealousy when Ide switches directly from their mature teacher to their attractive classmate, Hidomi, with no problems whatsoever. He never voices this to Ide directly, however, even though he begins to feel like a third wheel because of Ide's focus on Hidomi.

Marco and Ide spend a lot of time together and Marco sympathizes with his tough home life. They happen to disagree on Goro's fashion choices. For a brief period, Hidomi's personality change made Marco somewhat jealous of Ide's budding relationship with her. Marco found her incredibly cute and got a job at the amusement park to buy her a gift, but quickly dropped out of the love triangle when she returned to normal and began pursuing Ide more. Ide seems entirely unaware of this, and Marco's respectful decision to back off allows the group's dynamics to remain unchanged.

Ide is on hostile terms with Haruko and doesn’t want her to involve Hidomi in her schemes. He even tried to fight her with Jinyu’s guitar, after Haruko absorbed her. He wasn’t even a match for her, but he was determined to make sure she stays away from Hidomi. Haruko taunted him by saying, “If strength was measured by the hits one could take, then you wouldn’t be considered such a loser,” and, “You know nothing.” He responds with, “You also know nothing,” and, “You don’t satisfy me.”

Ide has only a few interactions with Jinyu, mainly due to his involvement with Hidomi. She saved his life a few times and healed him briefly after he received bad injuries as a result of Haruko's meddling with Hidomi. Jinyu doesn't want Ide around Haruko as she's very dangerous for him, much like she is with Hidomi. 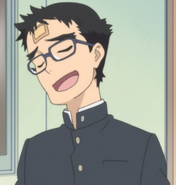 Retrieved from "https://flcl.fandom.com/wiki/Ko_Ide?oldid=8523"
Community content is available under CC-BY-SA unless otherwise noted.