Kitsurubami (キツルバミ?, Kitsurubami) is an agent of Commander Amarao's, a healthy young woman with a melanated appearance who worries about her boss' eyebrows. She is generally repulsed by him, especially by his occasional advances toward her.

Lieutenant Kitsurubami is an attractive young woman and second-in-command on Amarao's staff in the Interstellar Immigration Bureau. She is often seen either giving out vital mission data or on the field in investigations with Amarao. Amarao hits on her in the final episode, but she resists him. In fact, Kitsurubami seems to be generally disgusted by the idea of a romantic involvement (and likely any form of physical contact) with Amarao, though she looks up to him as a superior and follows his orders loyally. She also seems to become smitten with Canti, despite her initial efforts to attack him with an anti-tank rifle.

She appears to be the only "normal" or mature-appearing adult in FLCL; however, her apparent dislike of close contact with others adds an element of childishness to her character and actions. In episode 4, she saw that Amarao's eyebrows were fake, confirming both her and Naota's suspicions.

The Lieutenant has light brown skin and large matching eyes, with an upside-down triangle of three freckles beneath each eye. Her eyebrows are long, thin and black, which compliments the darkness of her upper eyelids, contributing to a slight hint of eyelashes well. Serving as a stark contrast, her blonde bob cut frames her feminine face nicely with longer strands at the front. She wears what is, presumably, the female version of the Bureau's uniform: a fitted black dress decorated with grey stripes and bronze fixtures. She adds to this a short white tie, white leggings and black boots; depending on the situation, she may also wear her classic black Bureau hat, orange goggles or a Bureau cap similar to the Russian military caps featured in media. 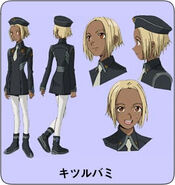 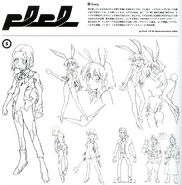 Retrieved from "https://flcl.fandom.com/wiki/Kitsurubami?oldid=8308"
Community content is available under CC-BY-SA unless otherwise noted.