"Full Swing" is the fourth episode of the first season of FLCL. Its English dub aired on August 8, 2003 on Adult Swim.

Haruko has joined the opposition’s baseball team and is getting along a little too well with Kamon. Naota doesn’t have any strange bulges on his head, however he does have some sort of beacon in there that the Bureau of Interstellar Immigration are tracking.

Haruko proves to be a star baseball player with phenomenal hitting and pitching skills, nearly single-handedly defeating the Mabase Martians, who are coached by Naota's grandfather Shigekuni. Naota, however, is ignorant of the game and gets hit by one of Haruko's pitches. At home, Kamon and Haruko indulge in odd behavior that raises Naota's jealousy. He meets Commander Amarao for the first time, who warns him about Haruko. Commander Amarao, who works for the Bureau of Interstellar Immigration alongside his subordinate Lieutenant Kitsurubami, later discovers that a satellite damaged by one of Haruko's hit baseballs is rapidly falling towards Earth. It homes in on a sudden burst of light from the N.O. channel in Naota's head that is triggered by his anger towards his father, targeting Mabase.

Naota confronts Kamon and nearly attacks him with his baseball bat, discovering that his father has been replaced by a robot. He finds the corpse of his real father and revives him with hot water. After receiving a message that Commander Amarao had asked Naota to pass on to her, Haruko takes Naota to the top of the Medical Mechanica plant, where she extracts a Gibson Flying V guitar from Naota's head, which she calls his "bat." She then leaves as the falling satellite heads straight for Naota. It unfolds into the shape of a baseball glove and launches a bomb that looks exactly like a baseball. Naota swings his "bat" and manages to halt the bomb, which begins to detonate. Haruko returns to rescue him by swinging her guitar and knocking it back into space. 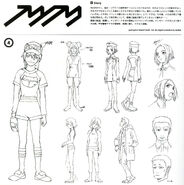 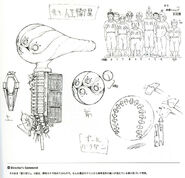 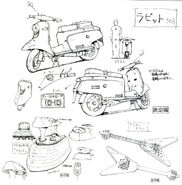 Retrieved from "https://flcl.fandom.com/wiki/Full_Swing?oldid=8212"
Community content is available under CC-BY-SA unless otherwise noted.