"Freebie Honey" is the second episode of season 2, FLCL Progressive and the eighth overall. It premiered on Adult Swim on the Toonami block on June 9, 2018 at midnight ET.

Hidomi wakes up from yet another dream of her becoming a zombie; at school, Raharu gives her a handout to bring over to Ko Ide, who didn't show up to class.

Hidomi wakes up from a nightmare about being in a gory zombie world and heads to school, where Haruko delivers a cult-like speech about the flawed nature of adults while giving the class their yearbooks. It is revealed from Hidomi's perspective to be crude stick-figure drawings despite the rest of the class being deluded in fabricated memories of events that never occurred. Later, Haruko asks Hidomi to give the missing Ide his classwork. Hidomi heads to a slum on the outskirts of town, where Goro Mori reveals that Ide has been hard at work making and selling machinery, sometimes getting beaten in the process. Hidomi gets a nosebleed as she starts to overflow from watching Ko get beat up by some shady customers, but faints before anything happens. She later wakes up in Ide's room and after an awkward moment, Haruko appears with a video camera. Then Jinyu crashes through with her Chevy Bel-Air transformed into a humanoid mech. Haruko counters by attaching a leash to Ko and summoning the mechanical creature from before. As the two women fight each other, Jinyu reveals herself to be a part of Haruko and attempts to convince her to stop chasing Atomsk down after the first attempt that created her. Meanwhile, Hidomi overcomes her inhibitor headphones and transforms into a tiny mechanical doll that blows away Haruko with tremendous force before returning to human form. Jinyu then converts her Chevy into a medical device, placing both Hidomi and Ide into it. As a result of what she witnessed, Haruko now knows Hidomi is her target. Hidomi comes to and remembers to give Ide his classwork for the day. 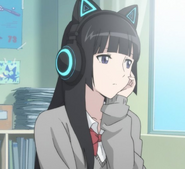 Retrieved from "https://flcl.fandom.com/wiki/Freebie_Honey?oldid=7844"
Community content is available under CC-BY-SA unless otherwise noted.