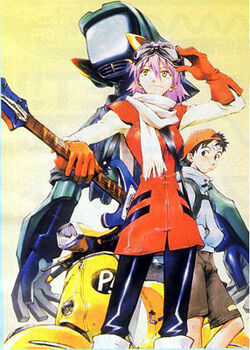 FLCL (Japanese: フリクリ?, pronounced Furikuri) is a series created by Production I.G and King Records. The original series aired in America on Cartoon Network's Adult Swim in 2003 several times. It aired on the channel's Toonami block from October 26, 2013 to January 25, 2014. The series is also available via Hulu, iTunes, and on Funimation's website.

Two new seasons are being created as a co-production between Production I.G and Adult Swim, one being the completed FLCL Progressive and its in-production successor FLCL Alternative.

FLCL is a coming-of-age story centering around Naota Nandaba, a 12-year-old, working-class boy living with his widowed father and grandfather. His life in the city of Mabase is interrupted by the arrival of Haruko Haruhara, who runs over Naota with her yellow Vespa 180 SS scooter, gives him CPR, then hits him on the head with a blue vintage Rickenbacker 4001 left-handed. Naota discovers that the blow to his head created an "N.O." portal, from which giant robots produced by a company known as Medical Mechanica emerge periodically.

Naota soon finds Haruko working in his house as a live-in maid. It is later discovered that Haruko is an investigator for the Galactic Space Police Brotherhood. Haruko uses Naota for her search for the Pirate King, Atomsk. She is at odds with Medical Mechanica, a monolithic industrial corporation. Naota is being watched by Commander Amarao, a special agent of the Bureau of Interstellar Immigration, who believes that Medical Mechanica is out to conquer the galaxy. Naota is ultimately drawn into a three-way battle between Haruko, Amarao, and Medical Mechanica.

FLCL was directed by Kazuya Tsurumaki and produced by the FLCL Production Committee, which included Gainax, Production I.G, and Starchild Records.

Tsurumaki has said that he tried to "break the rules" of anime when making FLCL. For example, by choosing a contemporary Japanese band to provide the soundtrack. Also, patterning the style more after "a Japanese TV commercial or promotional video," creating a work that is "short, but dense-packed."

FLCL's localization director and scriptwriter Marc Handler stated that localization of the script was the hardest part of the show. The in-jokes in the show included obscure pop culture references that had to be decoded and transferred to English audiences. One example was a reference to Cheerio, a discontinued soft drink in Japan, for the English release the choice was made to use a discontinued American soft drink, Crystal Pepsi. Director Kazuya Tsuramaki responded to criticism of FLCL, stating "comprehension should not be an important factor in FLCL".

The Medical Mechanica building featured is in the shape of a large iron. The character Amarao describes Medical Mechanica's goal as the destruction of all thought. FLCL uses the iron as a symbolic breakdown of "thought" by smoothing out the wrinkles as equated to the removing of the brain's wrinkles. For English localization, the Japanese team had to explain the concept because a direct translation of script did not convey the ideology.