Atomsk (アトムスク?, Atomusuku), also known as the "Pirate King" (海賊王, Kaizoku-Ō) is an enigmatic character; all that is really known for certain about him is that he can manifest entire star systems through his body with N.O. power, which Haruko Haruhara desires for herself. He takes on the form of a massive, phoenix-like creature.

He resembles a giant, glowing, red bird whose wings span for miles in almost all appearances on Earth. He has a nose ring on his upper beak identical to Haruko’s bracelet. However, when he emerges from Haruko in FLCL Progressive, he takes on the form of a glowing, red, human-like silhouette with no distinctive features, except for the symbol representing him and two white eyes, suggesting that he may have some degree of shape-shifting abilities. He is also incorrectly described once by Commander Amarao in FLCL. This version of him is seen from behind in space with a different, human-like form, with glowing, green lines similar to veins on a maroon-colored body, and still retains a fiery, red glow on his head, resembling wild hair.

The only time Atomsk "interacts" with any characters is when staring blankly at Haruko after her failed absorption of him in Progressive. She attempts to hit Atomsk several times, but he is so strong that her attacks are stopped by the air around him. Frustrated, she begins to demand that he let her take him, but her words quickly devolve into tearful sorrow from his rejection. Through all of this, Atomsk does not do anything, arguably making this a non-interaction, though he does wait until Haruko attempts to hug him to leave, the action revealing that Julia Jinyu was the host that allowed his form to change.

Atomsk, also known as the "Pirate King," is an enigmatic character, apparently the most powerful "space pirate" in the galaxy. His N.O. is great enough to steal entire solar systems. His physical appearance is that of a bird-like creature resembling a phoenix. He has a nose ring identical to the metal ring on Haruko's bracelet, which allows her to detect Atomsk's presence or the activation of N.O. in general. Atomsk's power makes him a target for both the Fraternity and Medical Mechanica, the latter of which successfully captured him at an unspecified point in time before the series begins. In response, Haruko is sent to track him down, ostensibly to capture him on the behalf of the Fraternity, though in truth she wishes to take his powers for herself, regardless of the damage she causes along the way.

During the climax, Naota emerges from Canti having absorbed Atomsk's power and briefly battles Haruko, who reveals her true desire to eat Atomsk and acquire his power. However, the fight ends abruptly when Naota releases the power, confessing his love for Haruko and kissing her. Atomsk emerges from Naota's head and, spreading his wings, opens an N.O. Channel through which he travels to an unknown destination. Soon after, Haruko departs Earth in pursuit.

At some point after FLCL, Haruko finally tracks down Atomsk, seemingly battling him in space just beyond Earth's atmosphere. Haruko successfully absorbs his power, causing an eruption of shooting stars that an older Naota and Mamimi witness. However, moments after absorbing him, the energy surrounding Haruko appears to split into two distinct individuals, one resembling herself with the other seemingly becoming Julia Jinyu.

Hidomi Hibajiri dreams of running through a ruined city covered in white ash with her body decaying, as several Medical Mechanica factories approach on the horizon, ironing out the wrinkles of the world. She eventually comes across what appears to be the desiccated body of Atomsk lying prone in a desert of ash. As she approaches his head, he opens his eye and fixes it on her; her headphones shatter and spiraling machinery emerges from the horn on her head, rebuilding her body into a mech that resembles an advanced, futuristic version of Canti, which allows her to confront and battle the approaching factories. In Fool on the Planet, Atomsk returns to Earth. Haruko attempts to absorb him, but fails and winds up releasing both him and Jinyu.

Atomsk is largely absent from the plot of the third season. Haruko and the main cast are more focused on the immediate danger that Medical Mechanica imposes, though that eventually leads to his partial inclusion. Similarly to when Canti powered up in FLCL, Kana Koumoto's forehead bears Atomsk's symbol when using her N.O. channel to its full extent. Medical Mechanica's irons seem to have an overriding program tailored towards Atomsk, causing one to bear his symbol on the wrist pushing it, diverting it off course to pursue his presence via Kana's N.O. channel. Kana's hair also begins to resemble wispy orange flames in this state, similar to that of Atomsk's red hair. Unlike other characters using his power, however, she does not become enveloped in his energy.

Atomsk is, presumably, the most powerful being in the series. He is so powerful, every time he is absorbed or captured, he always manages to escape. When someone absorbs him, they gain a glowing aura like his. His N.O. is said to be capable of stealing entire solar systems, he can possess other beings, and can survive in outer space. His N.O. can also be borrowed by other characters in the series who have N.O. channels to power up, giving some of them the permanent ability to use an N.O. aura in battle without his assistance.

Atomsk owns a right-handed 1961 Gibson EB-0 in a cherry-red finish, but he himself is never shown using it. Rather, it is borrowed by various characters through N.O. channels throughout the series.

It is unknown where, when or how he came to possess it.

Haruko chasing after Atomsk is like a metaphor in the show, comparing Haruko to a teenager that longs for adulthood. Haruko has an obsession with him and in Progressive, said she had been "chasing him for so long." She desires his power, but she may be hiding her true feelings for him. She broke down emotionally when Atomsk rejected her, but still wants to have him again.

Jinyu loves Atomsk and longed to see him again. She said she was flying through space with him but was left behind. She desires to preserve his freedom. She was also his host body when he was confronted face-to-face by Haruko, and hugged her as she cried during his escape.

Behind the Scenes[edit | edit source] 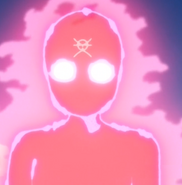 Retrieved from "https://flcl.fandom.com/wiki/Atomsk?oldid=8738"
Community content is available under CC-BY-SA unless otherwise noted.